A Year of Twentieth Century Literature

This year I am planning to read 10 twentieth-century books which have not been made into films or television programmes but are excellent books anyway. The book I will be reading in March needs to have been published between 1910 and 1919. I found this treasure:

Greenmantle by John Buchan ~ Published in 1916

Available in various places as an eBook
Available as an audio book read by Peter Joyce
Available free at Project Gutenberg: http://www.gutenberg.org/ebooks/559

It was hard to find a worthy book published in this decade that hasn’t been made into a film or television series. So many on the list of best books from this era have been made into movies – Howards End, Phantom of the Opera, Wizard of Oz, Secret Garden, Peter Pan, Pygmalion, Anne of Green Gables, The 39 Steps, Daddy Long Legs, Tarzan, Pollyanna, Father Brown, Sherlock Holmes, The Card, and Clayhanger, by Arnold Bennet, Jeeves… Wow! What a list!

And then I was looking for a book that I would enjoy reading. So that narrowed things down a bit more. I tried a few books, and several short stories and finally plumped for a book by the author of The Thirty-Nine Steps. It’s the second book in a series of five about Richard Hannay. And it’s not been made into a film or a television series. I heard that Alfred Hitchcock preferred this story to The Thirty-Nine Steps and that he wanted to make it into a movie but wasn’t able to do so because the film rights were too expensive. 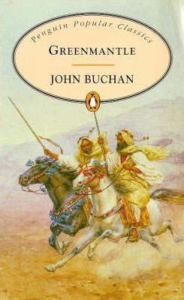 The story opens in late 1915 when Richard Hannay and his friend, Sandy, are recovering from war wounds received at the Battle of Loos in France. Hannay gets a telegram summoning him to the Foreign Office.

Sir Walter Bullivant (also in The Thirty-Nine Steps.) has a proposal for Hannay:- ‘Your mission, should you choose to accept it…’

Of course, Hannay does choose to accept it and off we go on a brilliant adventure across Europe, Turkey and North Africa. It’s a First World War spy thriller with a convoluted plot, thrills, chases, and more. Altogether, a rattling good read.

The book was published in 1916 and served as propaganda and encouragement during World War One. It was a very popular and successful novel, and to me it looks like the 1916 version of Mission Impossible or Jason Bourne, or James Bond (without the womanising).

Some of the terms used to describe people are very old-fashioned, and they are extremely offensive to the modern reader. We just don’t think or speak like this today. I really struggled with this, but I decided to look at it as an historical spy drama and remember that Richard Hannay was a man of his time – as was the author. There was no intent to be controversial or offensive, so I worked on trying to ignore it in the spirit of acceptance of different standards in times gone by. Apart from that, it is an engaging, old-fashioned espionage story. 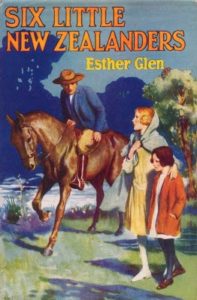 Of course, we can’t leave this decade without referring to everyone’s favourite ‘New Zealand children’s novel’, the very delightful, happy story about Six Little New Zealanders (1917) by Esther Glen. A title shamelessly pinched from an Australian story published in the 1890s, with a similar name and one extra child in the title. But enough of the friendly rivalry with our Australian ‘cousins’ – let’s draw a curtain of charity over who wrote what when, and enjoy the story with your young people today.

The story is about some children who go from Auckland to stay with three bachelor uncles who run a sheep station in Canterbury. The children learn about farming in an entertaining way and we are totally drawn into a happy fantasy by excellent writing.

The usual caveat applies about racial attitudes that shock us deeply today.

If you decide to read either of these books, write to me and let me know. And if you have recommendations for books to read, I am interested. Write to me: stephanie at homeschoolfamilylife dot com

During April I will be reading a worthy book published between 1920 and 1929 – one that’s not been made into a movie or television series. And I will report back next month.