This year I am reading 10 twentieth-century books which have not been made into films or television programmes but are excellent books anyway.  This month’s book needs to have been published between 1930 and 1939.

I couldn’t do it though. I couldn’t choose just one book. I have a lot of favourite mid-century authors and each one has written several books. So there’s tons of books to choose from, even when I’ve taken out the ones made into movies.

I solved this problem by choosing more than one author. Cheating, I know. But what can you do when you are spoilt for choice and it’s lockdown? So instead of a book review, I have two authors and a few books.

R C Sherriff is famous for writing the play, ‘Journey’s End’. He also wrote some first-rate novels as well as many plays and screenplays. One novel I highly recommend is a marvellous story called The Fortnight in September. It draws a perceptive picture of a family living in a cosy semi-detached house in 1930s London suburbs who go for their annual holiday in a seaside town on the South Coast.

I enjoyed the beautiful simplicity of the narrative; watching how the author (a lifelong bachelor with no children of his own) gets into the  heads of the two teenagers. He also seems to really understand the father, and to a lesser extent, the mother.  I like his understanding of human nature, and I like the subject matter of a family holiday at the beach. What’s changed in 80 years? we still treasure our fortnight at the beach, don’t we”? 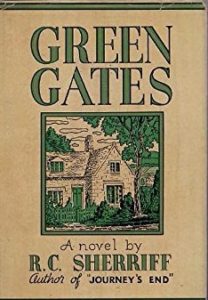 In 1936 Sherriff wrote Greengates, which is a wonderful story about a house built in the 1930s by a retired couple. We hear why and how they build it, what it looks like and contains, and how it changes their lives. We observe the social setting and preoccupation of the culture of that time – the urbanisation of the countryside, and the great value placed on owning your own home. How modern and relevant is this theme to us today in modern NZ?

My second recommended author is Lettice Cooper.   She was born in Eccles, Lancashire in 1897. She started writing stories as a child, she graduated with a degree in Classics from Oxford in 1918, and she wrote several novels for adults and children. I have managed to read two of them – The New House, and National Provincial. 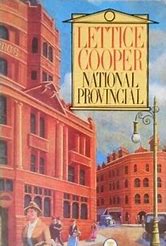 National Provincial covers an 18-month period from July 1935 to February 1937. It tells the story of a young journalist from the Yorkshire who has been living and working in London and returns to the fictional town of Aire (based on Leeds) in Yorkshire so that she can take care of her mother while working on the local newspaper.

The story ranges widely over various characters – factory workers, newlyweds, social climbers, captains of industry, nouveau riche, instigators, young lions eager to bring about change, and older lions eager to apply a more measured approach. If I were to continue to describe the story, the book would start to sound like a story of politics – but it isn’t. It’s a story of people. A well-told, engaging story of people facing difficult times, changes and uncertainties. Much as we are doing today

If I didn’t know for sure that this was written and published in the 1930s I would have said it was definitely written in the twenty-first century. The people are so modern in many ways, and the problems they deal with are universal and timeless.

The book was published in August 1937. Even at that time, knowledge of what was happening in Europe with Hitler, concentration camps, and ill treatment of minorities was widely known.

In June I will be reading a good book published between 1940 and 1949 – one that hasn’t been made into a movie or television series. I will try to stick to just one book, but I can’t promise. And I will report back next month.

In the meantime, I hope you decide to try a book by R C Sherriff or Lettice Cooper.  You might find their books in the library, in a second-hand bookshop, or as e-books online. They are all treasures. Look out for them. And if you have any books by these authors that I haven’t mentioned, I hope you might consider lending a book to me. I would treasure it and take great care of it. And I would return it promptly. Promise.

Write to me: stephanie at homeschool family life dot com