I really enjoy spending time with my favourite nearly-two-year-old.  The other day we were having morning tea together when I decided to take advantage of the mild, sunny weather, and stroll around the garden inspecting seedlings, flowers and trees, and also tugging out a couple of weeds here and there.  Mr Two-year-old got his gum boots on to join me, and we strolled together, discussing what we could see.  Then I thought it would be nice to cut some flowers for the house, so we did this together. 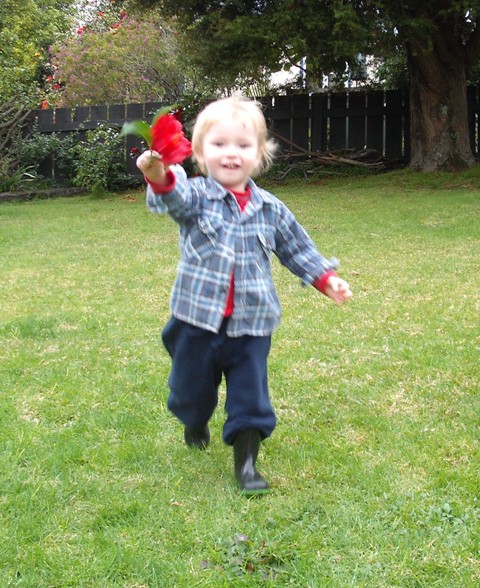 The next time he was around at morning tea time, Mr Two-year-old raced for his gum boots and asked me to go with him for a little walk.  He also organised a flower-picking, and he chose very carefully which flower he wanted to pick and give to his mother.  At just the right moment, she walked out of the house, and he ran with his arm outstretched in front of him, clutching the flower and shouting, “Mummeee!” She was duly impressed, and declared that the few moments of him running to her looking so winsome would remain with her for always, and were worth going through labour for!  I so identify with that.