This year I am reading 10 twentieth-century books which have not been made into films or television programmes but are excellent books anyway.

Eucalyptus by Murray Bail Published in 1998

Publications in the 1990s continue to fit in with my theory that having a book made into a movie makes any book, whether it is good or mediocre, into a best-selling book. For example, Fight Club sold only about  5,000 copies until the film came out in 1999. Then it became a cult phenomenon and sales of the book skyrocketed.

The list of books published in the nineties continues the trend started in the seventies of plenty of best-selling non-fiction and DIY books like cookbooks, diet books, gardening books, celebrity kiss-and-tell books. And there are a just a few good novels that haven’t made it to the screen.  One of these is an Australian book.  There were plans to make it into a film, but the plans didn’t work out.  It’s a whimsical tale, – a book which I would recommend for adults only because of its themes and references. 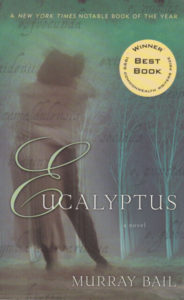 A widower, Mr Holland, gets a passion for eucalyptus trees and starts planting varieties of eucalyptus on his country property west of Sydney.  He knows all the trees by name and he is fascinated by them.     Holland has a daughter called Ellen who grows up helping to plant the trees and knowing all about them.

By the time that Ellen is nineteen years old she is a great beauty whose reputation for beauty has travelled far and wide. Her father wonders how to deal with all the interest from suitors and he comes up with a plan. He promises his daughter’s hand in marriage to any man who can name every single one of his eucalyptus trees.

Eucalyptus is written by Murray Bail, an Australian, born in 1941 in Adelaide.  He has been described as one of Australia’s ‘most remarkable fabulists’. A fabulist is a creator of fables. And Eucalyptus is a fable in the style of Scheherazade. Scheherazade saved her own life by telling stories – one each night for 1001 nights.

In Eucalyptus the hero has to win the girl by naming every eucalyptus on the property of hundreds of different trees. But if he manages to win her hand, can he also win her heart? And how will that play out?

Eucalyptus has won several major Australian literary honours, including the Commonwealth Writers’ Prize and the Miles Franklin Award in 1998. Murray Bail is considered to be such a national treasure in Australia that there is a portrait of him painted by Fred Williams in the National Portrait Gallery in Canberra. 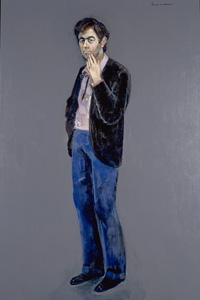 That completes my year of twentieth century literature.  In January I will make a PDF eBook of  all ten of the book reviews.  For now, I would like to wish you a Happy Christmas, happy summer holidays, all the best for 2021, and happy reading!

Write to me about books or homeschooling or parenting or anything else: stephanie at homeschoolfamilylife dot com